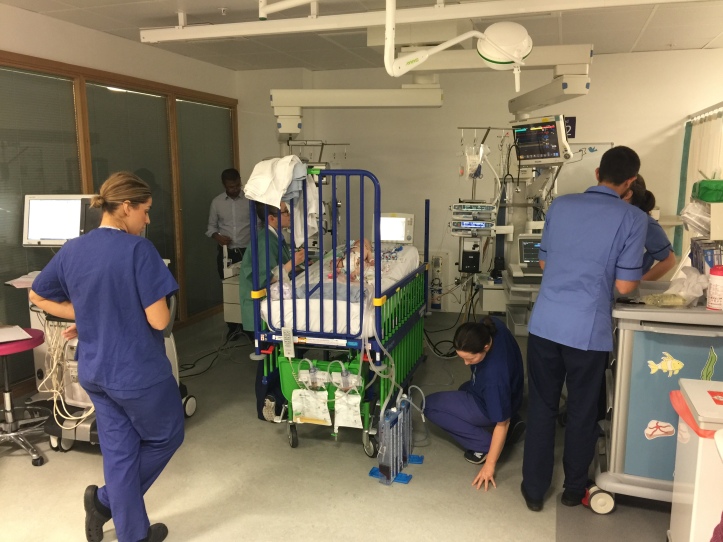 Well, after two false starts, this was finally … IT.  A 4.45am the alarm woke us up in Histon (Cambridge).  20 minutes later we were on the road to Great Ormond Street in the car.  Thankfully all the pre-theatre tests etc., which we undertook preparing for false start number 2 were valid so we could roll on in on the morning of theatre – phew!   Another full day of a prodding and poking a poorly 4 month old was not anyone’s idea of fun.

It was about 8am when we arrived and found our way to Walrus ward.   A nurse came to see us who would apparently be looking after Annie later on in the day.  At the time we had no idea how important she’d prove to be.   Shortly afterward the anethesist arrived.  It felt very serious now.   He was certainly over 50 years old, and had the loveliest manner about him.  Almost grandad-like he physically and metaphorically put his arm around Charlotte – just what she needed.

One of the surgeons came by with a felt tip pen.  Empathy and four black marker pen lines drawn later, we were getting closer.

We had to kill a lot of time walking up and down the ward….. and boy did it feel a long long time.

The clock struck 12, and our nurse and anesthetist pulled back the curtain.  It was time.

Getting the staff lift to the operating floor, we were wheeled into the theatre ante room.  We peaked into the operating theatre and it looked very ‘Greys Anatomy’ like.   Over the last few months, giving there had been many long nights for Charlotte, long enough for her to get onto series 7!

Annie had ‘gas and air’ and slowly settled.  We both kissed her forehead, paused to stare at her, cupped her head in our hands, and slowly walked out.  We didn’t say anything to each other, and we both fought to hold back the tears.

We packed up most of our belongings and went back to where we parked the car.  We had to pick up the pram and two suitcases to go to our accommodation.   We didn’t know how this worked, but we were so grateful for the ‘Sick Children’s Trust’ who provided a room for us that was less than five minutes walk away from the ward.

We got unpacked, and discussed how on earth we were going to pass the time.  Charlotte loves exercise, so I persuaded her to go to the local gym after I talked them into to giving us a day pass.   I felt exhausted and (unsuccessfully) tried to sleep next to my phone (just in case they rang with some news).

It got to about 5pm, and we debated whether we get something to eat.   I have to confess I must have won the debate as we ended up in Nandos!   I can’t remember what we ate, but I do remember finding any excuse to get up out of my seat to use some up some of that nervous energy.

6pm, and we decided to head back over to GOSH.  We collected our belongings from Walrus ward and Charlotte’s phone was ringing.  The ward is actually in the basement so the signal is a little ropey (to say the least), which was far from ideal as after about 10 seconds we realised the voice at the other end was the surgeon!   Charlotte handed me the phone and I sprinted off to get a better signal.  He almost put the phone down, but I could hear it went well and they’d closed the chest and done everything they’d planned to.  I raced back to Charlotte, who must have heard my voice as she was smiling.   All we wanted to do was to hold our little girl.  The surgeon said, you’d be able to see her on Flamingo ward in 30 mins.

6.25pm we arrived, and they said to wait ANOTHER 30 mins.  You have to trust the medical guidance, but we were desperate.

We were finally allowed to see her at 7pm.  There were 8 different doctors / nurses / specialists around our little Annie.  She was motionless having been given a paralysis drug.  Everyone was working very fast.  I simply couldn’t believe all the tubes going in and out of her.  I’m pretty sure there were 8 different drugs going in, and a number of drainage tubes taking fluids out.

At one point, and thank goodness I didn’t fully comprehend this at the time, but Annie had the “the jets”.  I don’t pretend to fully understand this, but there is a risk of a sustained fast heart rate and cardiac arrest.  The medical staff were worried and working hard…. and not saying much.   Their expertise and dedication is flabbergasting and I’ll never be able to thank them enough.