Well, that was close… literally only a few mins before Annie was due to go into her first surgery … the nurse came into our bay to explain that the operation was postponed. We were speechless and a tear dripped from both of our eyes.

For the first postponement we were given 2 days notice – this was 2 minutes! Now, there was a good reason as a heart transplant had to take precedence, which I totally understand. Nevertheless that doesn’t lessen the emotional rollercoaster we were on as parents.

The day before had been a full on day of tests and ‘consent’ giving etc. Poor Annie was prodded and poked for 6 hours! And she let the suffering doctors and nurses know what she thought too. It felt a long day for everyone I think. But we were ready.

That night, as we walked around London for 90 minutes while Annie slept we took in some of the sights, I bored Charlotte with my anecdotes of meetings I’d held in various offices too. Some of the time we spoke, other times we were both contemplating our own thoughts and taking the the chance to stare at our Annie.

Anyway, fast forward 12 hours, upon leaving the hospital on Tuesday, having just been told of the postponement, I went into the PALS office to complain. A delay is understandable, but why almost three weeks? That would mean a 6 week delay from when Annie NEEDED the op in the first place. I was far from convinced that the scheduling was optimal. Now, I understand such delays are commonplace…. but I’m a protective dad of his little girl. Perhaps my complaint worked as we got a call today to say that Annie was ‘clinically deteriorating’ and has been pushed up the list. The doctors and nurses at GOSH are so incredibly thoughtful and caring.

This picture shows how far we came – even getting her surgical name tag fitted! Note the zipped front top – a top tip from other parents duly noted. 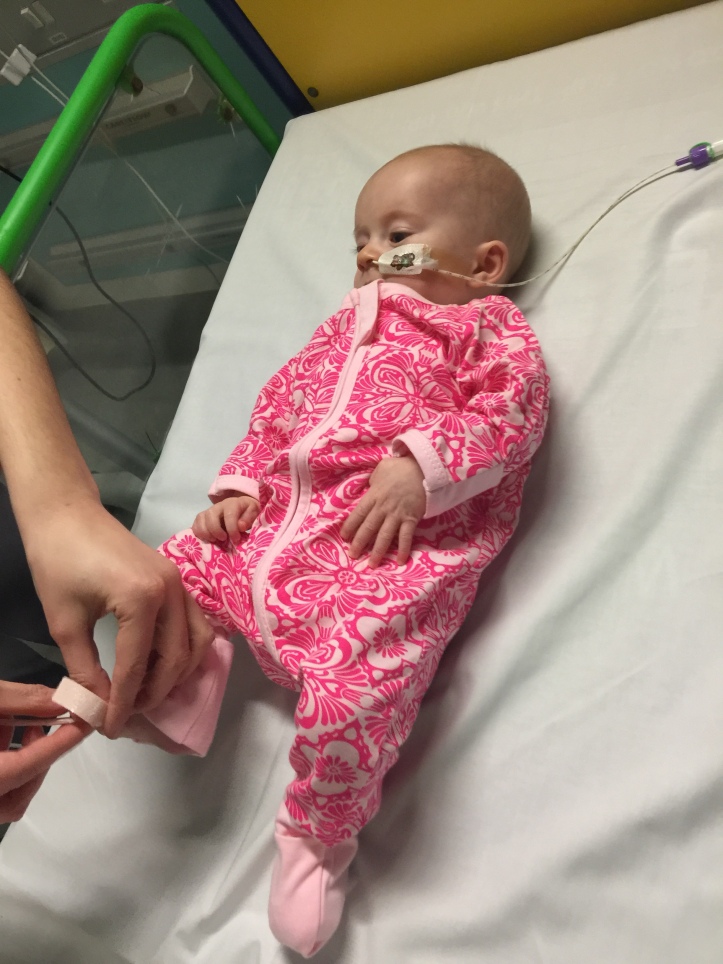